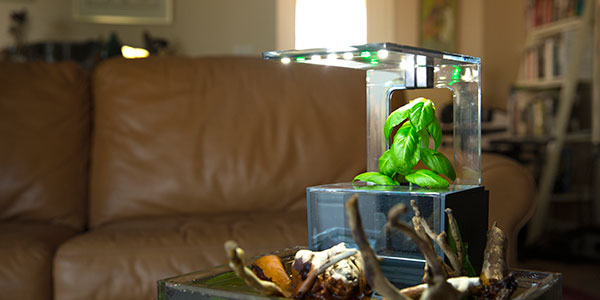 We were pretty impressed when we read about the EcoQube small-footprint desktop aquarium on HomeAquaria.com. For those who want an affordable, low-maintenance foray into aquarium ownership, the EcoQube offers a great solution. But the EcoQube isn’t just an aquarium. The makers have taken the next step in technology and added an aquaponics system to the kit.

In a nutshell, aquaponics means that a plant is growing out of the water in the tank, using the fish waste as nutrients and also naturally cleaning the tank water from toxins. It’s a great idea and it eliminates a fair amount of work in terms of water changes and algae cleaning.

When fish eat, they leave behind ammonia-rich waste. Bacteria in the water break down the ammonia into nitrates. A buildup of nitrates is harmful to the fish, but the plant uses these nitrates as a nutrient, leaving behind clean water. And as everyone knows, less cleaning means more time spent enjoying your aquarium.

Aquaponic systems have been used by cultures for thousands of years, and it’s cool that they seem to be coming back into fashion as of late. The EcoQube is just one example of this technology, and seems like a great learning aid as well as being a fun aquarium.

See some cool videos of the EcoQube in action over on Homeaquaria.com.