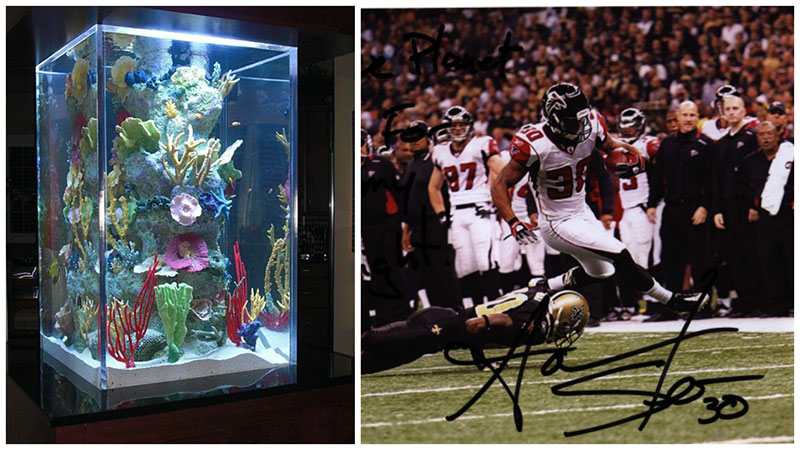 It was a Tuesday afternoon unlike many others, I was sitting at my desk when the phone rang.

“Blue Planet Aquarium Services, Jon speaking, how can I help you?”

“You have to help me!,” a woman immediately replied.

“Great, I’ll dial 911 and have the police, Swat Team, ambulances, and fire trucks sent to your location!” I replied.

“No, no” she calmly responded, “I am standing in front of one of your aquariums at a Nordstrom Department Store and it is unbelievably gorgeous!”

“Ah, well this is something I can help you with!”

Turns out this woman was in town from Madison, WI and had an aquarium at home that needed some serious help. Although it wouldn’t take long before the plot thickened…

“We have an aquarium at home that is a complete disaster. What makes it worse, it is situated between the kitchen, dinning and living room, is viewable from all sides (360 degrees) and from the second floor as well as the main floor. It is truly the centerpiece of the whole house. It’s covered in algae, the water is green, and we can’t even keep fish alive.”

“We live in Madison WI and there aren’t a lot of companies that provide aquarium service. Those who do, we’ve already called and nobody was able to help us!”

So, after discussing a little more and getting some basic information about the tank, we decided the best way to proceed was to have our staff come out and do a tear down/re set of the aquarium and document every piece of equipment so I could evaluate if they had the right equipment to ensure success. We also wanted to test the tap water being used to see if this also could have been the source of her problems.

We sent out a pair of technicians for a day-long blitz of the aquarium to drain, rinse, and replace gravel in the tank, pump out filtration and leave us with basically a brand new aquarium with no fish in it. We planned to leave the lights off so no algae would grow until we returned the following week with any changes of filtration or equipment that would need to be made and also to add fish back in.

A Surprise at the Door

The thing was, when our techs arrived to perform all this planned work after a two and a half hour drive, nobody seemed to be home. I got more than one or two rather unhappy messages from the guys, wondering why on earth I would send them so far away for a rather routine job, if I didn’t confirm someone would be home.

But I had indeed confirmed that the client would be home, and as we tried every contact we had for this new client in a panic-stricken state, the front door to the home finally opened.

Behind it was an enormous human being who said, “You my fish tank guys?”

As a 14 year veteran of the NFL, he told the guys he usually doesn’t answer the door for complete strangers. Something when you think about makes perfectly good sense in this day and age, even if you are the size of two normal people.

After welcoming in the guys (one of whom is a huge NFL fan and knew more about Mr. Stecker than what was probably comfortable) the guys chatted with him about the background of the tank. Turns out Aaron had just retired and the gorgeous home they built was going to be a great place to raise the kids. Also, Aaron went to Western Illinois University and was accustomed to mid western living and wanted such a place to settle down in for his family. But the problem was, such a unique element to the house, the custom aquarium, was proving too much for local vendors to handle.

Ultimately, our staff performed the tear down and set the stage for me to come back and fix what we found was the true problem all along: the tap water.

The standard test for local tap water is termed a TDS test or “Total Dissolved Solids” meaning as I like to say, how much “stuff” is in your water. This doesn’t identify exactly “what” is in the water, just how much. For saltwater aquariums specifically, we want to have close to zero TDS (or nothing in the water) and the salt mix use will replace all the good occuring natural metals and minerals known as “trace elements” back into the water. To compare, Chicago tap water is around 130 to 160 TDS. Not awful, not great. But if we are trying to get to zero, the water at the Stecker house being at 750+ was absolutely unusable for aquarium purposes. All sorts of nutrients for algae were being pumped into the tank as well as things that were simply toxic to fish. We added a powerful Reverse Osmosis/Deionization system to purify and store tap water for refilling the tank to make up for evaporation as well as to use in future water changes.

Since then the rest is history. The Stecker’s had us out for a few services after everything was corrected and to coach the local service providers and be sure everything was working great. Judging from the photos, I’d say they were pretty satisfied clients!