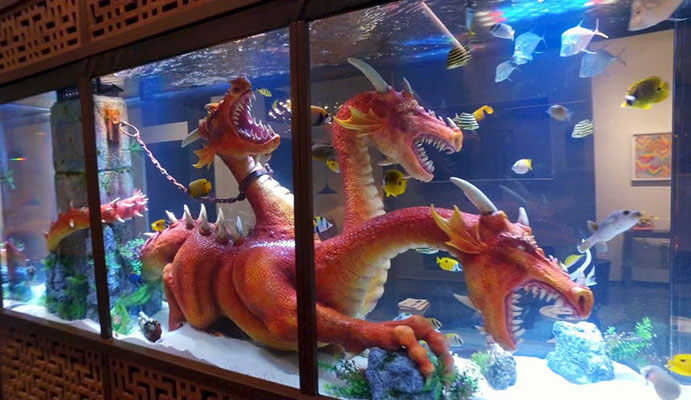 We all like to see how celebrities are “just like us,” and we aquarium owners are no different. These celebrity aquariums will wow you, and perhaps inspire you to up your aquarium game!

The ultimate shark tank isn’t on the popular entrepreneur show, but in Tracy Morgan’s house. Not only does the 3,000 gallon aquarium hold seven sharks, two stingrays, and an eel, but the wall features a larger-than-life shark appearing to chomp down on the enclosure.

Musician Steve Aoki wants to be friends with a dragon. At least that’s how he expressed his design wishes to the Tanked designers. They transformed the existing asian designs in the room into custom cabinetry complete with a 3 headed red dragon centerpiece.

2 Chainz keeps it real with his love for family and Atlanta. His electric-colored tank features the Atlanta skyline mixed with bright corals for a centerpiece worth stopping for.

Jeff Dunham is known for his ventriloquism comedy with puppets such as Peanut, Walter, and Achmed. The designers made replicas of these characters and placed them in an aquarium designed to look like a stage so they can always be putting on a performance.

Neil Patrick Harris’ love for magic extended into his custom Houdini trapped in water aquarium. Complete with bubbles escaping the escape artist’s nose and feet extending out of the tank, the aquarium is rounded out with barracudas and an eel.
As you can see, when it comes to celebrity aquariums, the possibilities are endless. Which is your favorite?