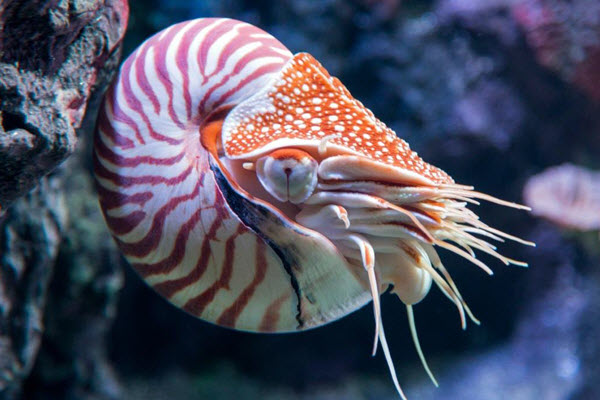 My favorite request occurred when a client put a 300-gallon saltwater fish tank in his office. After thinking about reef vs. fish aquarium he decided, “I want both”. We installed a reef aquarium below his fish aquarium in a highly customized stand. After that concept was hashed out, he thought, “I want an octopus too.” I designed a small tank separate from the rest of the reef (as the octopus would eat everything and knock over corals.) We also added a sealed cover and darker lights (as the octopus is nocturnal). The result was super cool. As octopuses only live a year, this one too passed. Instead of replacing the octopus right away, we added a Nautilus, which was also fascinating to watch!

We’ve also had some interesting requests for aquarium decor over the years. We’ve made custom corals with Acura logos for a car dealership, 3 different sets of corals themed for the Cubs, Bears, and Blackhawks for one sports fan’s aquarium, and even added numerous model dump trucks, excavators, and backhoes for a heavy equipment leasing company.

But the strangest request has to be for the custom aquarium we designed for the Spike Lee Movie, Chiraq, filmed in Chicago. The aquarium was supposed to be in the home of a street gang leader, played by Nick Cannon. It featured a backdrop of a fictitious Chicago Street Gang logo. I also made the lights a purple hue, the gang’s color. That is a request that doesn’t come in every day!